We are delighted to team up with local digital artist Dan Read for a very unique, creative, colourful fundraiser. For every pet portrait sold, 10% goes directly to support local animals in the DN14 area. Whether celebrating a best friend or memorialising a lost love, Dan's beautiful pet portraits will honour them in a tasteful piece of bespoke art you will treasure forever.
• Digitally painted from your favourite photos
• Proofs given upfront with fast turnaround • You only buy if you LOVE your portrait
• Prices from only £29.95
• Print sizes up to A1 - 594mm x 841mm
• Supplied physically or digitally worldwide
A huge thank you to Dan for this timely fundraising opportunity. To order, head to the website www.danread.co.uk 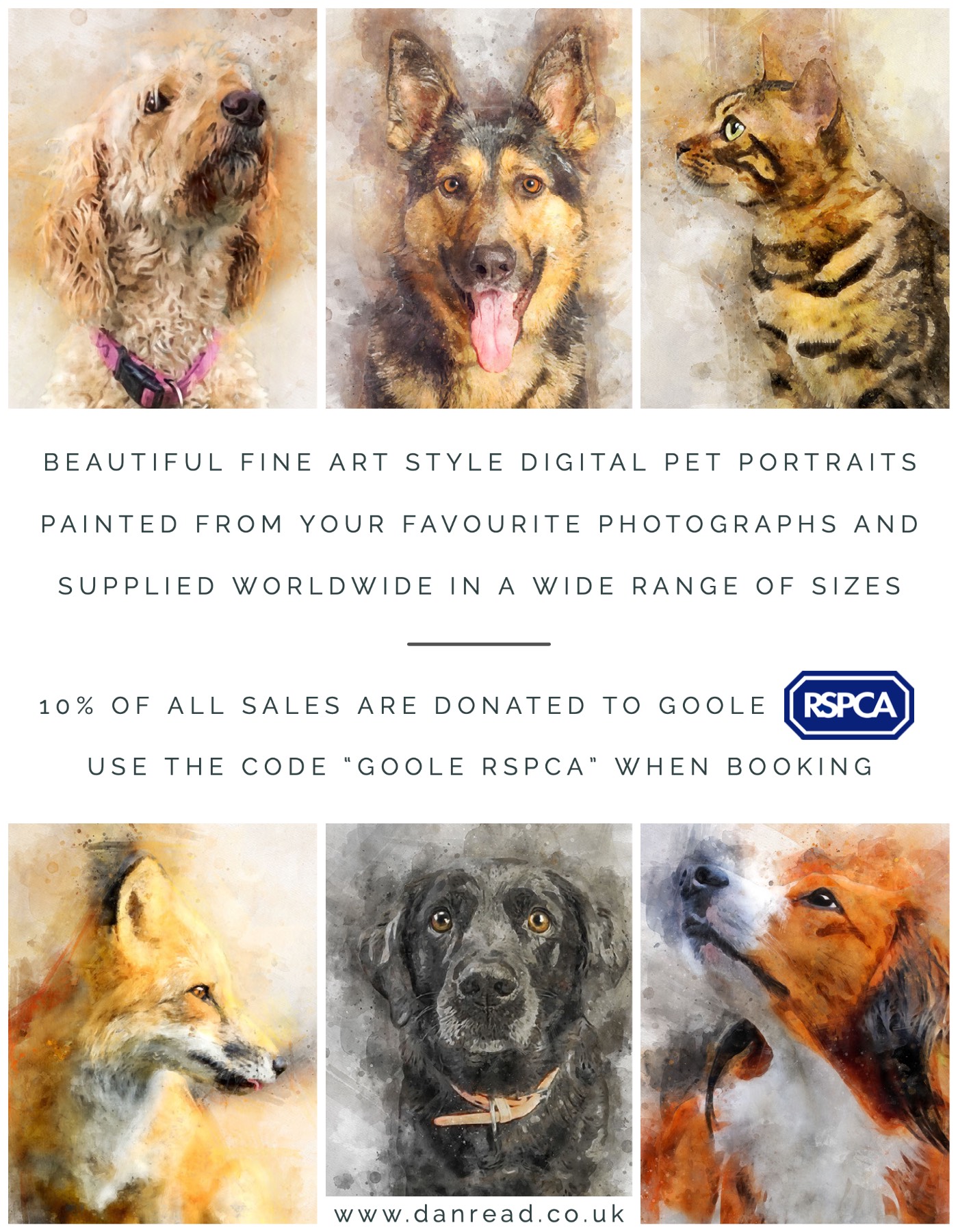 We are continuing to hear reports of individuals preying on upset people who have lost their pets while pretending to be calling from the RSPCA or other animal charities. Scammers appear to gather personal information via lost and found pet sites. They then use this information to claim to be ringing from a charity - sometimes mirroring our number - to say the lost pet has been found injured and payment is required to allow veterinary care to be continued. One incident involved someone believing they were donating £1,500 to the RSPCA.

The RSPCA Press team has sent a warning release in the areas where this has been reported: An RSPCA spokesperson said: “We're shocked and saddened that fraudsters are posing as our staff to prey on desperate people searching for their missing pets and think it's despicable that they're conning them out of money. We believe the conmen are scouring websites and social media to find missing pet posters and targeting the owners who have offered financial rewards and are mirroring our phone number to convince the public that it's a genuine call.

If your pet is missing please alert your microchip company and inform local vets, rescue centres and neighbours to help find them. If you're using posters or sharing details online please be aware that your phone number could be used by scammers; always be careful when offering reward money or sharing bank details.If you believe you've been targeted by these fraudsters please report the incident to the police.

To clarify, the RSPCA does not ask for money for veterinary care for missing pets over the phone in this way and would urge anyone who receives such a call not to give out their personal details. Anyone who is contacted about a missing pet in RSPCA care should ask for a reference number and the officer’s name and call our national call centre on 0300 1234 999 (between 7am and 10pm). If the call is not genuine, they should contact the police on 101.”

Please note that, due to the COVID-19 restrictions, we are unable to invite prospective adopters to meet our cats and kittens in person. Instead we are offering a video meeting, eg, via Zoom, where you can meet your prospective pet and also ask the fosterer as many questions as you like.
Hopefully, we will be back to normal working soon.

Goole RSPCA have a trained speaker who can visit your school, group, business or club to talk about our work and tell you about some of the character cats and kittens that we have fostered. The talk is suitable for all age groups and lasts around 40 minutes.
There is no charge but a donation will be most welcome. Please contact us for further information.

On 29 June a piece of landmark legislation came into effect. The Animal Welfare (Sentencing) Act was passed in April 2021 and increases the maximum sentencing under the Animal Welfare Act 2006, from six months to five years, for animal fighting and cruelty offences.

The new legislation brings England and Wales in line with Scotland and Northern Ireland,
where five years is already the maximum sentence for those who commit animal abuse offences.

Gold medal, Gold trophy, Goldfish? A pet is not a prize or something to be won.

None of the fun at the fair
Fairs can evoke a sense of nostalgia for many, with fairground jingles, sugared doughnuts and arcade game prizes. Sadly, there's no fun at the fair for the animals given away as prizes. While many of us would not accept a dog, cat or rabbit as the result of winning a game - receiving goldfish as prizes have become all too commonplace across England and Wales.

Can you help us make pets as prizes a thing of the past?
Unfortunately, the National Cruelty Helpline regularly receive calls relating to animals being given away as prizes, particularly goldfish - who are often prized off at fairgrounds across England and Wales. These goldfish are often held in unsuitable plastic bags for long durations and taken to homes that aren't adequately prepared to meet their welfare needs. We think you'll agree that while candy floss comes in bags, pets shouldn't.

Life in a bag
Goldfish are easily stressed and very often, fish that are won as prizes suffer miserably from shock, oxygen starvation or die from changes in water temperature, and many will die before their new owners can even get them home.

It's already illegal in Scotland
Currently in England and Wales, it's an offence to give animals away as a prize to anyone under the age of 16, unless accompanied by an adult. This differs from laws in other countries, for example Scotland, where it's an offence in almost all circumstances to give an animal away as a prize to anyone regardless of age.

Prevent pets as prizes
We need supporters like you to take the action and let East Riding of Yorkshire Council know that pets as prizes are a no-win situation.

By taking action, you'll be encouraging your local council to stop this practice on council-owned land, as well as write to their respective Government for wider change.

When it comes to pets as prizes, you win, they lose.

YOU can make a difference to the life of a cat in DN14. Choose one (or more) of the following ways to help us help cats and kittens that desperately need it.